from little tots to Roughriders… 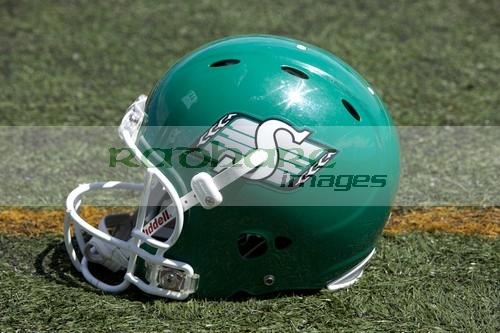 saskatchewan roughriders helmet
Its been a strange sort of week, we arrived back from the road trip just in time for band rehearsals for Wednesdays gig at the Saskatoon Jazz festival and to get the gear packed for the next road trip to the Winnipeg folk festival after Fridays performance at the Canada Day celebrations in Saskatoon. I’ll do a blog on the gigs separately after the gig photos have been approved.
On my first or second night in Saskatoon I had promised the local 4 year old kids soccer team that I would turn up for their final coaching session and do a team photo and player portraits for them. I know a couple of kids in the team and thought it would be a neat wee present for them all. Of course the pressure is on because I dont like to promise anything to kids but not deliver and they are usually some of the fiercest critics as they arent afraid to say what they think.
The evening went well but still managed to get myself bit again by the mosquitos – seems to be habit forming on recent trips for me. I cant publish the kids photos for obvious reasons, I’d love to but its just not the done thing but I thought I’d mention them in the blog regardless.
The following day was a completely different ball game, literally. 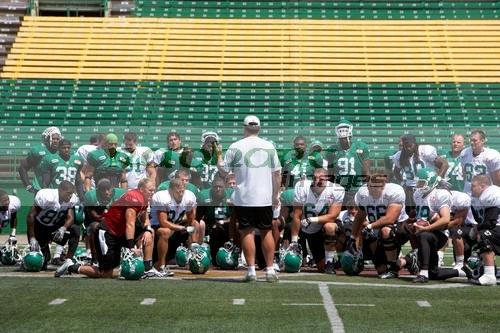 saskatchewan rough riders coach and players
I got a rare opportunity to photograph a pre season training session for the Saskatchewan Roughriders. Id not really heard of them before I arrived here but you cant miss them when you are here, stores everywhere, merchandise everywhere, flags, banners, slogans, wall to wall green and white. They are third in merchandising sales of any team in Canada which in a hockey mad country says a lot. 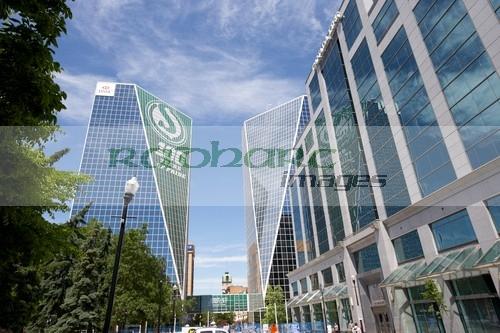 downtown regina with riders logo
The Roughriders are the CFL team for the province, thats the Canadian version of American Football. A lot of the guys are ex-NFL or are poached from here for the NFL (one of their players went last year). 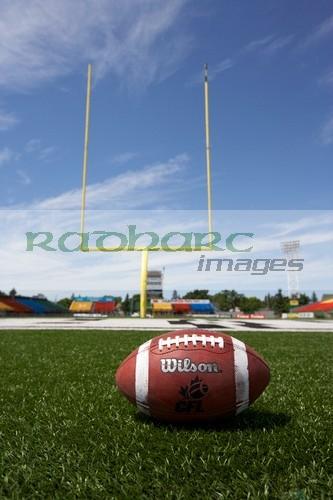 cfl ball and goal at taylor field
Its hard for me to describe but getting the opportunity to photograph from the touchline is the equivalent of some random person who doesnt know who Man U or Liverpool are being asked if they fancied photographing their big pre-season training session a couple of days before the season starts.
How could I say no? 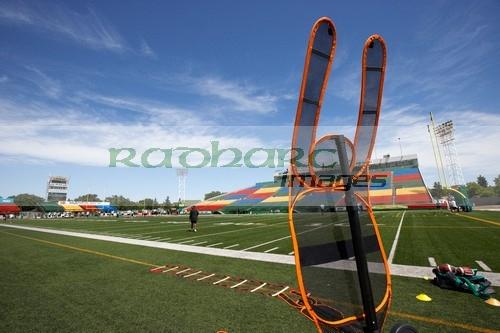 mosaic stadium taylor field regina saskatchewan
Of course I was also there to document one of the media teams who interview the teams and produce a local television show dedicated to the riders.
It was an odd experience because I just happened to be wearing a Liverpool FC football shirt so a couple of the guys asked me about it including one Ac Milan fan. There were people in the crowd watching who would have sold their children to get to chat with the players on the pitch warming up and one said to me thats the equivalent of you walking in off the street and talking to Wayne Rooney at Old Trafford. 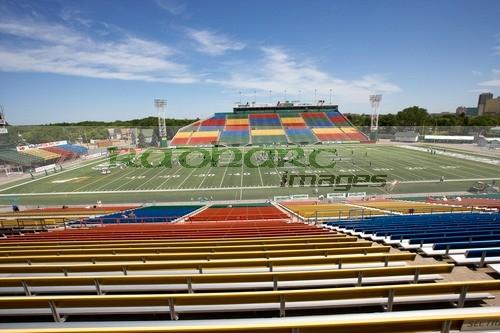 mosaic stadium taylor field regina saskatchewan
I was interested in a range of photos, other than some photos of local irish american football teams playing in the park and a bit of interest in NFL when I was at school (Chicago Bears if you must know), I know nothing about the sport, so really was looking for more ‘colour’ than actual sporting action.

cfl roughrider player throwing ball
I had a quick chat with the local newspaper photographer who thought I was over for the Royal Tour. Our music/photography tour certainly was regal but not in the way he thought. I didnt get much of rundown on the plays as they still keep the cards close to their chest with the season only a couple of days away. 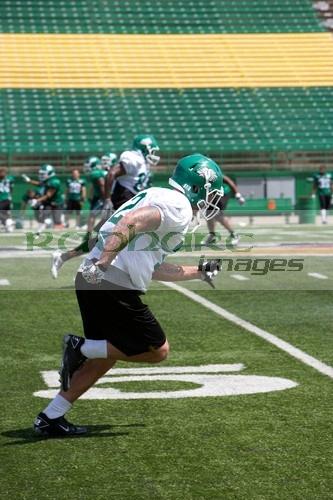 saskatchewan roughriders training
The level these guys play at and the sheer size and bulk of these guys is “awesome” up close. I know that word is overused in this particular neck of the woods but to feel these guys running past, holding each other and these were teammates in practise, and the odd knock, made me think I wouldnt really like them if they were angry.

saskatchewan roughriders training
The video crews arent allowed to video the plays and the practise so I was almost knocked down in the scrum for the player interviews at the end of the session. The quarterback was interviewed and the guys openly chatted about their merchandising deals and contracts etc which was refreshing compared to some of the prima donnas in the premier league. 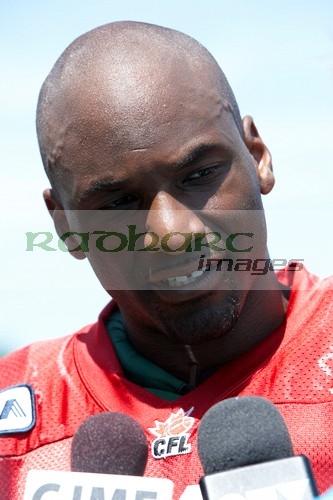 rider player Darian Durant
One of the guys who had just struck a potato chip deal (crisps) was asked if the chips were healthy. Now back home we would have got some bland crap or a pr person stepping in but the guy said they werent, they were chips, they werent meant to be healthy and everyone loved eating a bag of them. Everybody laughed and I found that so refreshing. People out in baking heat, standing around waiting for these guys who just seemed happy to talk and sharing a laugh. 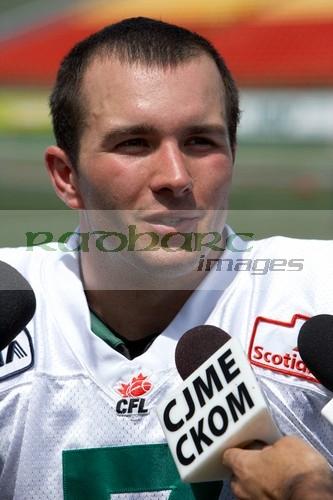 rider player Weston Dressler
The way sport should be and probably why this teams colours are everywhere and everyone loves them…
…Something a lot of professional sports teams could learn from…
…I’ll certainly be watching their results from now on. 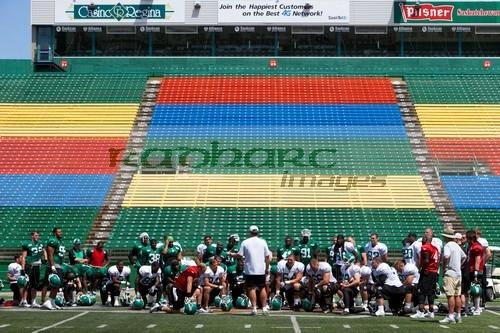