Fire up the Alfa!


For years Ive been wanting to do up an old car, wheeler dealers style. It probably goes back to an old harp lager (I think) ad on tv when I was a kid where a group of guys restore an old jag. Ive thought about an old jag, old rolls, old landrover even. Every event I photograph which includes generally older guys with beautifully restored cars makes me think about doing it again.
I have all the tools required, collected over the years although a lot remaining from my first cheap socket set when I was 18 and had my first car and was required to continually work on it given a student budget!
Ive replaced engines and suspension, done bodywork (badly, ok and ok in the rain) and Ive even been seen getting a bus to the North Antrim Coast with a car radiator and 10mm socket on a monday morning to try and put it in the car I abandoned by the side of the road on the Saturday afternoon!
I have two problems with this approach. Firstly I already have 2 cars, a campervan and a boat, all of which need a bit of work and I also have to rebuild the studio and am thinking about getting a loft conversion done to give me a bigger home office. Secondly I don’t have the time with all of the above and the normal amount of travel I do coupled with my workload at home.
Talking with friends after I came back from Antarctica, they suggested that I already have an old car that I can do up, my old Alfa 156.
It was in a bit of a sorry state having not been driven for almost 6 months with the travel and with the MOT falling due when I was in South America. 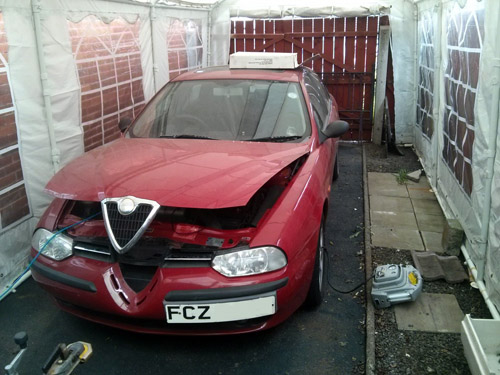 Back in early 2000 I was still recovering from my accident, had just returned to work after a year off and as I was now walking again, the doctors had just passed me fit to drive. My car at the time was an old Rover 214 which I generally did love but sitting outside for a year had not been kind to it and given that I couldn’t bend down properly, couldn’t change a tyre and all of the stuff required to get it back on the road and keep it on the road I started to think about getting a newer car. Id never before bought a new car so the same mate who suggested I redo up my Alfa had came up to my desk in 2000 and threw down the brochure for the Alfa 156. We had both walked past one in Prague a couple of years before, before they were even available in the UK/Ireland and I thought it was the most beautiful car Id ever seen, maybe with a little touch of sideskirts and rear spoiler, oh and decent alloys.
At the time anyone with a bit of wit was importing cars into the UK and with the land border with the rest of Ireland it made sense to see how much it would be to get one down in Cork and drive it up… just to see of course.
‘If you get one, I’ll get one and we’ll drive down to Monaco and drive the street circuit in them at night’, my mate said… yeah thanks for that.
I went for a test drive in one…
So I rang the dealers agent here in NI and enquired about how much it would cost…. …and then asked for his bank details for the bank transfer.
Id never ordered a new car before and having to get through the list of options could have been daunting…
…except this was an Alfa and every petrol head on the planet knows what they are. Just check out the numerous Top Gear references. Go here and skip it all to 6:44

Engine? 1.8 because if I get the 2.5 V6 I’ll be dead before I make the first repayment.
Level? Sport Pack 1.
Anything else? yes sunroof and low rear spoiler, not the pram handle one.
Do I need to ask which colour? Does it come in any other colour than Red?

6 weeks later I just happened to be in Cork on Easter weekend. I went round to the dealer on Easter Monday just for a nosey and told them who I was and what I had ordered. Apparently they had just had a consignment in and round the back was one ‘like mine’ if I wanted to go and have a look. It was straight off the boat with bits missing for transport, all the protective polystyrene and plastic still on it, things written in grease pen on the windscreen but it was still lovely.
I went home later that day whilst sticking on a cup of tea, I checked my messages. ‘Joe, just wanted to call to say your car is in in Cork, it needs some prep work and first service but it will be up to you in a couple of weeks.’
So I had been sitting in _my_ car after all.
Three weeks later a knock at the door and there was the salesman with my car sitting in my drive.
Fast forward 14 years later and its still there on the same drive but the tarmac has been replaced twice!
Last year I had the timing belts replaced as it was approaching 70k miles. A couple of years before (about 3000 miles ago) Id had to replace the clutch. A friend asked me to show my Alfa to his wife as they were thinking of getting a summer runaround car and he fancied and Alfa and needed to persuade the wife a little. She loved it..
..then over coffee she asked if it normally lost that much oil… A few drips maybe, a few litres, no… The Gearbox seal had gone leaking oil into the clutch housing, ruining the clutch and release bearing. They had an Alfa in their drive for 2 weeks until I got the new clutch and towed it to someone who would fit it.
Id failed the previous years MOT for the standard passenger side upper wishbone so had bought over 400 quids worth of rest of suspension and all round brake discs and pads, just hadn’t had the time to fit them yet.

That’s about it for the minute, its not perfect, I couldn’t get any of the dents out as the dent removal kit I bought off ebay, didnt, and falling short of some major investment in time and money its as good as its gonna get for a while. Its certainly in a better condition now than it was when it was my daily driver 10 years ago.

All that was left was to fire up the Alfa and take it for a run up the coast to Ballintoy Harbour (one of the Game of Thrones venues), and as these stories are nothing without pictures… 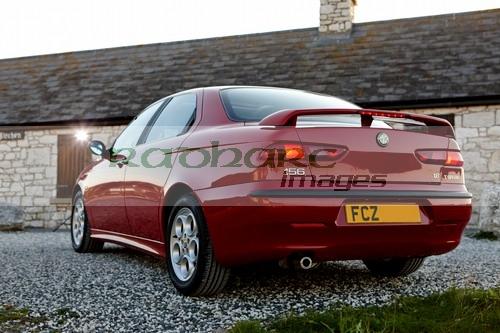 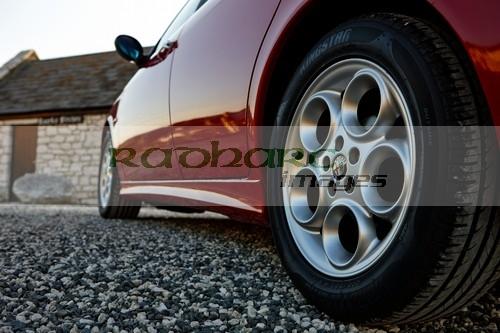 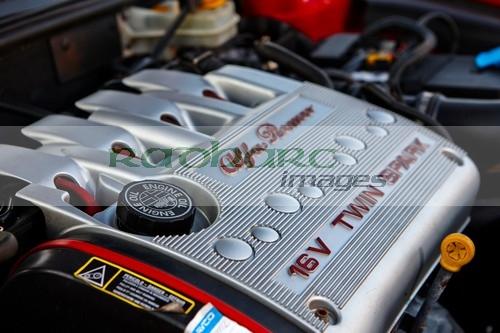 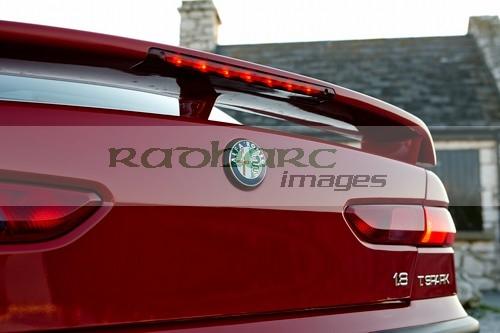 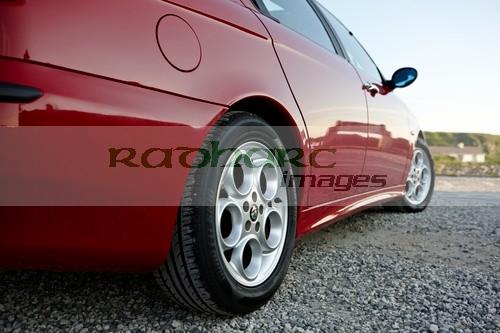 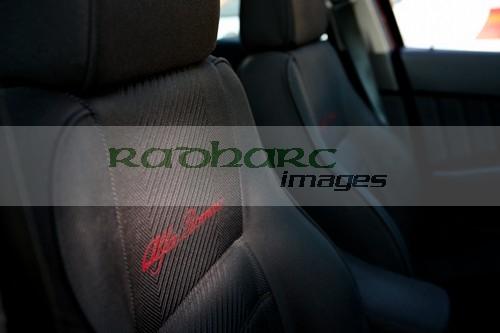 Alfa Romeo dark seats with embroidered writing in a 156 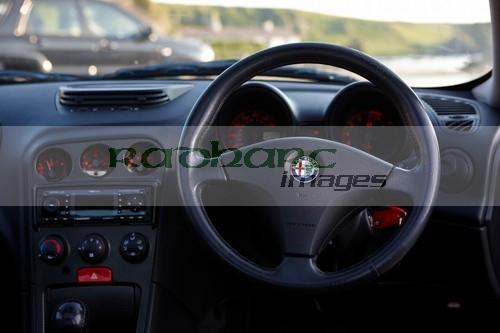 steering wheel and interior of an Alfa Romeo 156 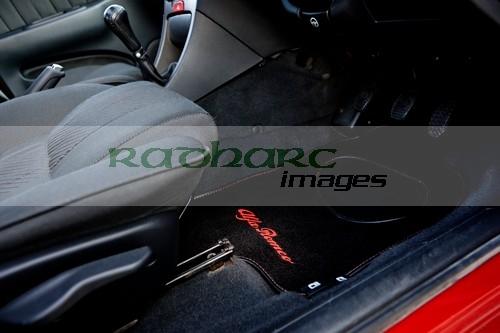 tailored car mats in the interior of an Alfa Romeo 156

key in the ignition of an Alfa Romeo 156 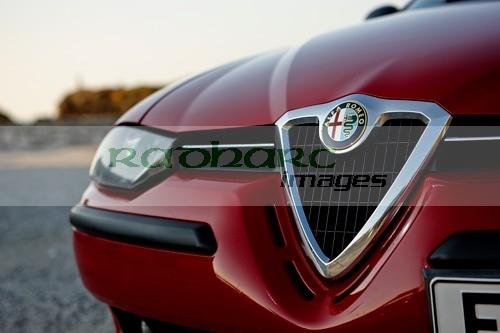 badge and grille of Alfa Romeo 156