A blast from the past

About a year ago I happened to be out for a birthday dinner for a friend of mine. One of her work colleagues was interested in meeting me because he had known my Dad and had grew up a couple of streets away in the Falls.
We sat and talked most of the evening and he showed me a book he had just bought of the photographs of a local photographer I may know, Vincent Dargan. Vincent had lived in the same street as us (Slate Street) when I was growing up as a kid and I knew him and his family well. He was a good friend of my Dads and my Uncle Joe. Vincent had taken many of the photos of us as kids and was always running around with his cameras.
I went home that night and ordered the book from Amazon.
A couple of days later the book arrived and I spent the afternoon going through it, I opened one page to see a photo of my Uncle Joe and a few of our old neighbours standing outside our old house in Slate St. Within minutes a copy of the book was ordered from Amazon and away to my brother in Liverpool.
A few years previously Vincent had found my website and emailed me a few kind words of encouragement but we hadn’t seen each other since. I emailed him that afternoon to congratulate him on his book and to apologise for not being able to make the next book launch. (It was during the time I was in South America/Antarctica)
Vincent got back to me to say the exhibition was to run before the book launch and sent me the dates. I could make the day before the opening and arranged to meet him there and to give him a hand setting the exhibition up.

I arrived up and spent a good few hours chatting over the photos, the people in them and one of the first photos I pulled out of the box was one of my Dad and my Uncle Joe. Id never seen this photo and there it was staring me in the face. A few people who just happened to be passing had called in and a lot of them recognised me, not as Joe Fox but as ‘one of the Foxs from Slate Street’. It was funny catching up with people I hadn’t seen in 30 in some cases 40 years and who knew me as a baby and a child but I had no recollection of them.
As I was leaving Vincent handed me a photo saying ‘here’s another one you may have not seen’ and it was a photo of my Dad about the same age as the photo with my uncle but he was holding a roughly two year old boy, me. 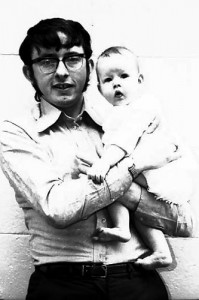 One of the very few times in my life Ive been left totally speechless, here was a photo of me, over 40 years ago with my Dad who had passed away over 10 years ago. I was older now than he was then. The tears were rolling down as I took a photo of it on my phone and sent it to my brother.
This is the thing that sometimes, we, as photographers, forget. We either don’t realise or we forget the impact the photo will have on people, the connections with the past and the ability to connect the past with the future. My brother had just had a baby of his own and he rang me back to say how remarkable the resemblance was between this next, newly born generation and the current and previous one.
Saying thanks to Vincent wasn’t enough, it seemed totally inadequate for the feelings that single photograph had awakened.
Vincent and I kept in touch over the coming months and then one day I got an email from Vincent inviting me to be his guest at a talk and exhibition as part of the Ulster Bank Belfast Festival at Queens. Of course I said yes, only problem was I was just disappearing off to Canada for a month.
Before I left the idea was for me to give a 2 minute piece to camera on memories of Vincent, his influence on me as a photographer and as someone who was subject of his photos.
By the time I got back I realised that my involvement would be a bit more than that. Vincent was recovering from illness near the time so was having difficulty with long periods of speech. I was only too glad to help out and act as interviewer and lead the talk on Vincents work. I spent a full day with Vincent going over the questions, talking about the old days, drawing up notes and dealing with the publishing company and the festival organisers.
It seemed odd to be involved in an exhibition that wasn’t my work but at the same time a great privilege to help Vincent present his.
The exhibition was in the Falls Library which was my local library as a kid and I hadn’t been in the room we were presenting in, in over 30 years. I met some of my old neighbours and they talked to me as if the last 30 years didn’t exist.
Vincent held court at the back of the room and every time I looked round he had a small crowd of people following his every word. He need not have been nervous, his work stands out as an exemplary piece of social documentary. Its a great record and archive of not just the lower Falls but Belfast in general in the 60s and 70s. I hope we can find a suitable repository for his archive so that it can be preserved for future generations.

Vincent’s website is at www.belfastimages.org
His book The Falls: The People, the Community, the Memories can be purchased here from Amazon or here from the publishers, Blackstaff Press.

Images copyright and used with kind permission of Vincent Dargan.