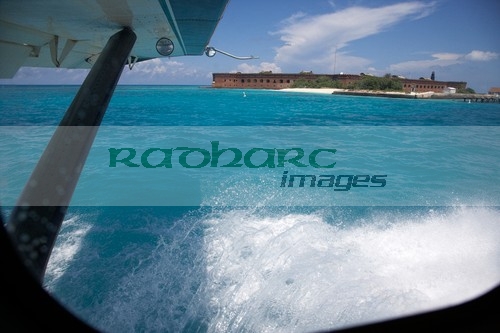 Keep a weather eye out me hearties…

Author: admin
Category: Photography, travel
Tags: boat, boats, charter, dry, fishing, flight, florida, fort, holiday, jefferson, journey, key west, national, park, sea, seaplane, tortugas, travel, USA, vacation
← true lies, well sort of
The Old Man and the Sea…. →
Search Radharcimages
I had the strangest dream last night, I was living in a “bordello” at the turn of the century and every hour a new woman would come into my room and…
damn fecking cockerels crowing from early on, dozens of the feckers, cant even see out a decent dream.
No danger of me sleeping in tomorrow morning as the dawn chorus round here is bloody cocks crowing about the place.(yes Ive stopped the bordello-esque comments, I mean male chickens).
So blearly eyed tucking into my still warm cinnamon rolls I asked what the story was withe the amount of cockerels running about the place. 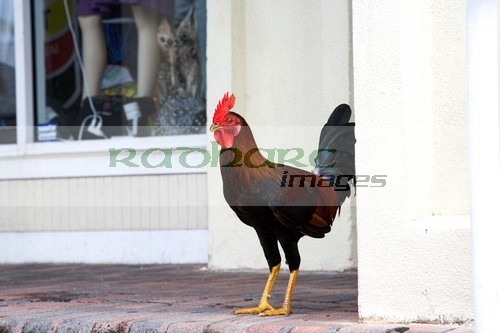 key west wild feral cockerel rooster
They were originally brought over by Cubans who indulged their passions for cockfighting and when it was outlawed in the 1970s and combined with their owners moving away the chickens and roosters were left to run feral about the place and boy do they! You have been warned, bring earplugs!

It was then off to the airport to check in for my first ever seaplane flight, not quite the usual TSA stripdown and search but on checkin I got asked what sized flippers I needed. I could understand that this is the one flight where having a lifejacket under your seat might come in handy but flippers? Seriously? Of course the other 10 or so first timers were too polite to ask but Ive never shied away from looking like a dick in front of people I dont know ‘the mask, snorkel and flippers are in case you want to go snorkeling when you get to the Tortugas’, a collective ‘ahhhh’ from the assembled crowd, yeah thanks for that folks. 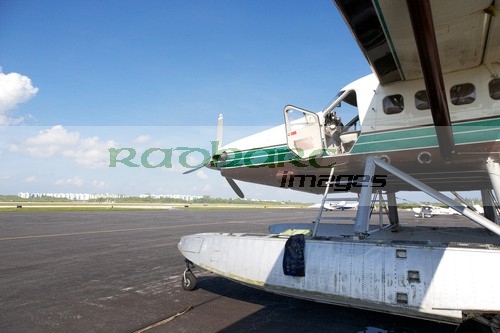 Seaplane key west airport
It was a short flight, just about 45 mins and over some beautifully clear water and more like a tour than a flight with commentary about the large sea turtles (tortugas) you could easily see from the plane, along with some shipwrecks, islands and remarkably the gouges and scars on the sandbars and coral made by ships and small boats getting lost or running aground. 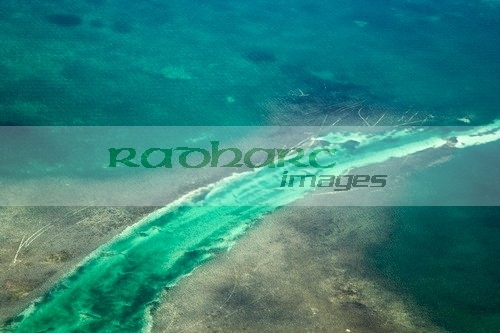 gouges cuts in coral caused by ships
One of the fellow passengers was a former B52 bomber pilot with the US Air Force so if our pilot got sick or we were called to drop suntan cream bottles and sets of flippers on Cuba, that we would be in safe hands.
Landing on water, well at least intentionally, has to be one of the weirdest feelings in the world. Its one of those ‘should we really be doing this’ moments where everything about your being is screaming ‘NOOOO PULLL UPP’ whilst trying to retain that calm ‘I’m a world traveller and have seen it all’ type of face. It wasn’t really that scary in the end as we coasted to a stop on a beautiful white sandy beach and tied up. ‘If you think that was scary, wait until we take off’ said our ex B-52 and F111 pilot ‘apparently we have to go on one float and can easily flip if there’s a gust of wind. Yes thanks for that Maverick. 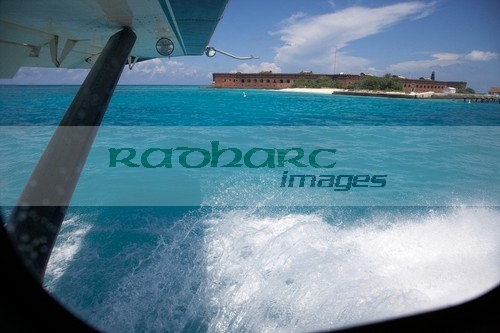 landing at Fort Jefferson in the Dry Tortugas
As with everything stateside, everywhere you go is the biggest, tallest, widest, largest, in the x area. x being defined as the largest area in which that statement is true. Fort Jefferson is the largest brick building in the western hemisphere. Where this western hemisphere starts and ends is debatable but I would suggest probably just this side of Giza.
It is an amazing structure though, built as a fort over 30 years yet never finished, not surprising as everything had to be boated in, including fresh water. Used as a military prison its most famous residents were those convicted in the Abraham Lincoln assassination. History lesson over it takes a fair bit of time to walk round its 11 acre site and whilst the military aspect is one point, it really does show what humans can do if they want to, or perhaps in places they shouldn’t! 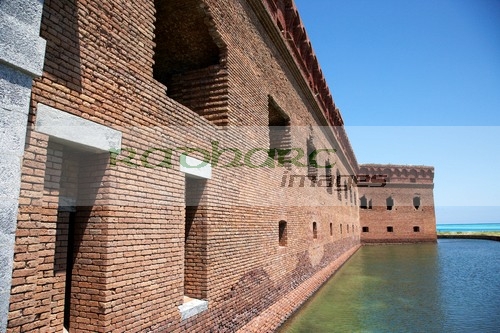 Fort Jefferson
There’s a staff of 8 rangers on the island and I got chatting to one of them who was just there for a couple of months. One of those all American guys you just cant help but like, slightly understating stuff that is always overstated. Later on I got to chat to another one who had been there for 18 years, I don’t know if he volunteered for the job or was shipwrecked, its hard to say. 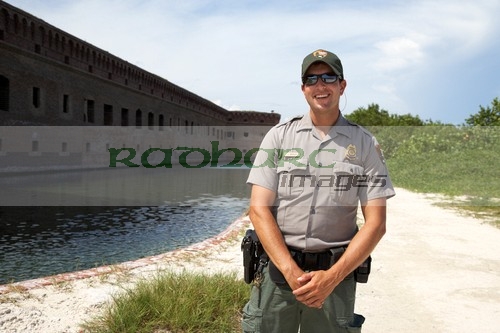 The non 18 year ranger
One thing I forgot mention was how hot it was. Hot is probably an understatement and it became clear why they recommended you snorkel for an hour or two instead of getting fried. I hadn’t snorkelled in years and definitely since I had my accident so I wondered if I would be lost forever in the Gulf of Mexico by swimming in big circles as one leg overpowered the other. The seaplane people had recommended in and around the former coal docks which are just wooden piles now and teeming with fish. Id brought my underwater camera so thought Id go and give it a go. The water was lovely and warm but after a while I started getting cramps in my bad leg and my flipper was working loose but I couldn’t bend my bad leg enough to reach it underwater. Slight flaw in that plan Joe. There then comes one of those moments where you realise you are completely out of your depth…. …no I actually mean it literally! The water temperature changed significantly dropping at least 10 degrees and the sunlight no longer reached the bottom. Its about now you realise that perhaps you might be getting hungry or that big things around you might be getting hungry. I don’t think anyone of a certain age could swim in that sort of water without hearing a double bass playing in the background! I went up to the surface and swam towards the warmer water and didn’t quite panic but did wonder where the hell everyone else had gone and I thought maybe Id got the time of the return flight wrong. As there were only about 10 people on the island I thought there was a fair chance they would miss that one empty seat on the plane but as I got closer to the shore one of my fellow travellers said ‘You have big cojones buddy, but your pictures must be great’. I didn’t quite understand the reference until they explained they had heading back to shore when they saw the sharks and I went towards them with the camera flash going…
…apparently Nurse sharks are quite tame as ‘attacks on humans are rare but not unknown’. What they were actually telling me was when I was trying to put my flipper back on 3 nurse sharks swam past all at least 2-3m long.
Maybe time to do a bit of sunbathing. 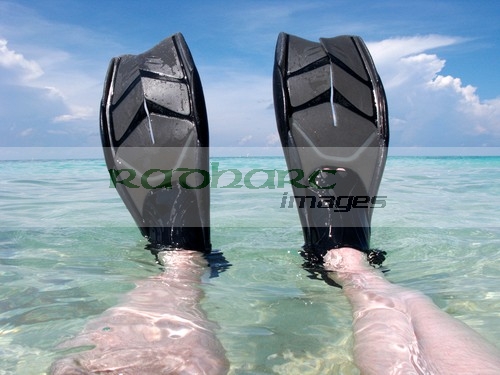 snorkelling in the Gulf of Mexico
Id a couple of bottles of water left before we headed off and on the way back to the plane got talking to a family who were camping there for a couple of nights and would get the ferry back soon. I’m sure they were fine but I gave them my spare water and then went back to the plane to see if anyone had any spare water they could leave them. It was only then the enormity of how difficult life here must have been, particularly when the rainwater collection system failed and seawater got in. Everything has to come by boat and even a family of four camping for a couple of days isn’t something undertaken lightly. I’m sure they were fine but I’d have hated to hear the news a couple of days later just for the sake of a couple of bottles of cold fresh water.

The Dry tortugas wasn’t one of the things on my list before I left, to be honest, I’d never heard of them and for a chance conversation at the chamber of commerce tourist office at Key Largo I wouldn’t have had such a great trip to a quite remarkable place. Returning to Key West it was hard to then see past just a naval and party town. 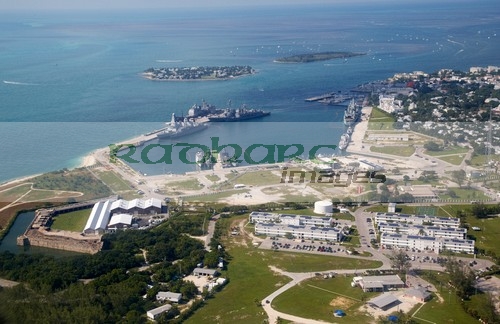 flying back to Key West
I got back to the B+B just in time to head out again for the sunset celebrations but I was so glad Id went the night before, overcast storm clouds made it more the sort of sunset I was used to at home, a bit of an anticlimax for the one evening in town cruise passengers and the bane of the life of travel photographers.
I had a quick bite to eat and then said my goodbyes at the B+B as I would be up at a ridiculous hour of the morning to get the charter boat out to catch my Marlin! I wondered if I’d sleep long enough to finish last nights dream..