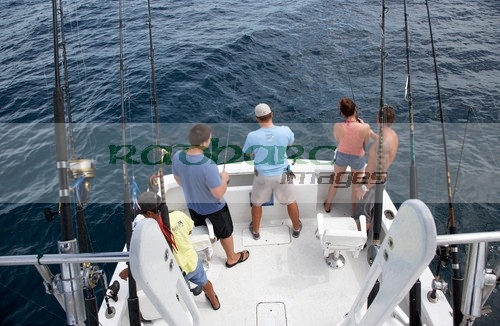 The Old Man and the Sea….

Author: admin
Category: Photography, travel
Tags: america, american, boat, charter, cost, fees, fish, fishing, florida, group, key west, morning, tip, tipping, tips, tour, united states, US, USA
← Keep a weather eye out me hearties…
Im Barack Obama and I approve this message… →
Search Radharcimages
No chance of a lie in today, no chance of continuing last nights dream and no chance of any breakfast, ok maybe one of those 3! Its a 6am start for an 8am departure 2pm return and then perhaps 5 hours driving to my overnight stop. Considering sundown is about 6pm it looks like I’m gonna be driving in the dark at some point.
It is surreal having a cock crow as the alarm ringtone on my mobile phone, as there were a couple of false alarms even by 6am!

Up and out far too early, the roadworks up near the Key West harbour took me past a wee place with a lot of taxi drivers parked outside. After 10 mins of driving my Sat Nav had decided to kick in and listed the spot as a small cuban coffee stand – cuban coffee queen – Hallelujah!
A couple of strong cuban espresso coffees and a key wester sandwich and I was feeling a bit more human, and I still had a half hour to spare to wander round the harbour.
Then you have one of those moments where you are sick to your stomach. I got back in the car, turned the key and nothing, not a peep. Silence. Do you know that sick feeling where you realise that you are 20 mins away from losing 200 quid, a trip of a lifetime and being this far away from the nearest hire car place, probably not within a days drive of your overnight accommodation and airboat ride booked for the next morning? Well lets be honest about it, apart from breaking into a sweat and swearing a lot I didn’t really think of all that either.
The ham and eggs of the key wester sandwich were now stuck in my throat and the buzz from the espressos was starting to kick in. If only I had parked the car properly instead of just abandoning it half on the road because it was 7am after all I might just be able to leave it there and get a cab to the boat…
…thats if the cab drivers hadn’t all just left a couple of minutes ago.
I dont normally panic but this early in the morning Im not really thinking and trying to get any thought running through my head was like trying to find a salad in this country!
After what seemed like an eternity I noticed the gear lever was in drive, not park…. wonder if that’s i…. …it was. now breathe and get the foot down… 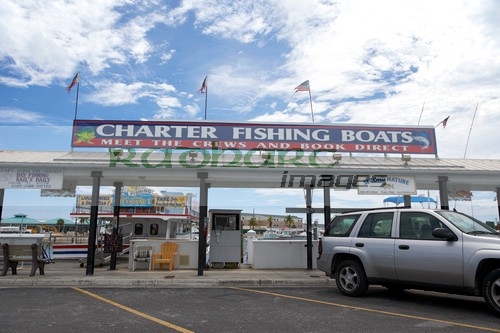 Key West Charter Boat Row
I wasn’t last to the boat by a long shot which really did piss me off, every 10 mins wait was 10 more minutes of driving in the dark later on this evening. That and when I went to pay for the charter the captain asked if I wanted to swipe my credit card twice. No, no problem I have enough credit and have no limit on spend…
…I didn’t understand…
…swipe it once for the charter boat fee and once for the extra 20% for the mates fee…
..eh?
Well the mate isn’t paid and relies on tips so its 20% of the charter cost. Here comes the rant about being nickeled and dimed in this fecking country. Its not the cost, I was paying for 2 places after all and as a photo op and possible trip of a lifetime if they had said to me 240 quid for the place, rather than 200 quid then I wouldn’t have batted an eyelid. Its the fact they dress up what is essentially tax evasion or whatever it is in some medieval system of whatever the fuck it passes for. Now in full rant mode! Seriously, just tell me the final price, don’t tell me the price then add on sales tax then add on tip then add on parking fee then add on 10 dollars for a fecking sandwich. Tell me my 200 quid trip is going to cost me 260 quid I’ll pay it and probably wont say a fecking word. When you tell me its 200 quid and I have to pay for the crew separately, I have a fecking boat of my own, been fishing for over 20 years and could crew the boat myself!
Sigh…. Oh and I prefer to tip people after the event, get me to some fecking fish and earn your tip, I’ll probably pay it anyway, no need to put signs up on every eyeline on the boat.
FFS, I thought it was the going practice in the entire country but other folk from Carolina were complaining about all the hidden charges, etc. Must be just a Florida thing, no wonder their economy is in the shitter if this is how they treat tourists. Seriously, we go back and tell people and write blogs etc… (ok my rant loses a bit as its almost a year later but you catch my drift). 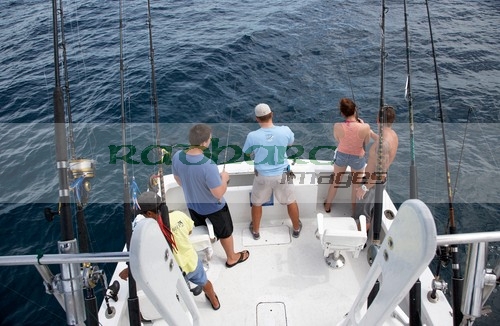 charter boat fishing out of key west
Speaking of catching drifts… when I said I had been fishing for 20 years, Id never been fishing US charter boat style. Back home you bring your own rod, hire a rod and everyone fishes off the boat at the same time. Here you sit in the chair whilst everyone else sits back, applies sun cream, drinks beer, eats potato chips and the mate rigs up 4 rods for you and the captain drifts or trolls the baits. When “you” get a bite the mate strikes it then hands the rod to you to reel in. After you’ve caught one, its the next persons turn. Not really fishing, not really sporting and although it might be the way they do things here, certainly not the experience I was looking for. When in Rome though…
Its all a bit sanitised and we do catch a few fish but nothing spectacular. I catch the biggest fish of the day and get a bit of a fight but again Ive had bigger on my own boat in Belfast Lough! (well maybe not but nothing much to write home about, I didn’t even take a photo). We all get some fish and its apparent its the wrong time of year, wrong season, wrong tide and that the oil spillage in the gulf has had a more devastating effect than has been portrayed in the media. 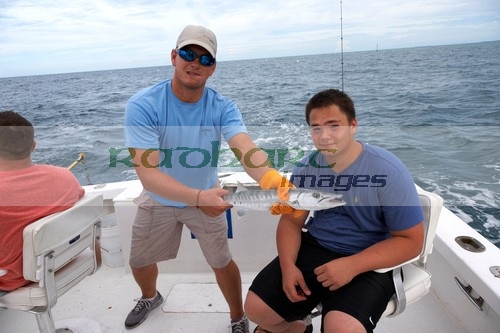 Teenage boy tourist with charter boat caught fish
Well that and when we do hit a big shoal of fish the captain wont let us take them as they are messy, will shit all over the boat and the mate will take hours to clean it up… …well isnt that what we are paying you for?
We spend the last 20 minutes letting a redneck, his neck was literally red by this point, swim off the back of the boat.
As you can gather, not exactly a trip of a lifetime and a bit of an underwhelming experience. The experience was different to most of what I have experienced in the US before and since so perhaps I just got a bad boat/crew in the normal holiday season.

The weather cleared when we were out and the drive up the overseas highway and long range of bridges was one of the highlights of the trip and one of the worlds greatest drives, if not one of the scariest, mile after mile of bridges! 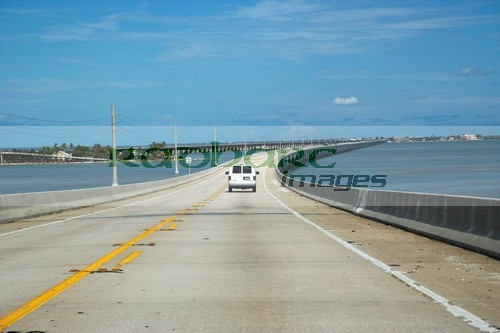 Overseas highway US route 1 florida
We had ended the charter about a half hour early as we all decided we had better things to do so although it was a race up the keys to cover as many of the turns as possible before dark I did get to stop a for a couple of photos and a quick walk on the old seven mile bridge, part of which is in True Lies as its the old bridge that appears to be blown up by a missile strike. 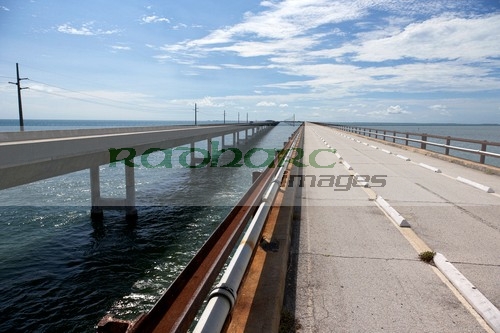 Old and new seven mile bridge overseas highway florida
As I mentioned on the way down, most people speed through on the way up and whilst theres probably not a lot to stop for except for a few restaurants, fishing stores, charter boats etc, occasionally something happens that just forced you to stop or pull over. Just before the turn west, well it was the only turn in the road after Key West, sort of drive for 150 miles, turn left, drive for 130 miles, turn left and pull into the hotel parking lot! Its so flat here and as its right on the Atlantic coast its easy to see the storm fronts rolling in, and what storm fronts they are! 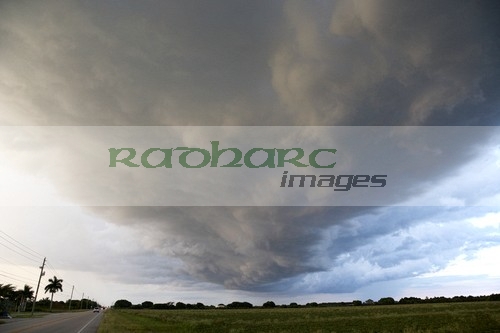 thunderstorm front moving in to Florida
The result of turning right into the sunset, other than the pain in the arse (well eyes really) of driving along a road aligned with the low on the horizon setting sun was that the rear view mirror was filled with this.. the thunderstorm in the background and the setting sun lighting up the road back with all the signposts etc. As the sun disappeared below the horizon the regular flashes from the lighting in the rear view mirror made me think a car was following me but for 100 miles I had the road to myself. The road is the Tamiami trail, state road 90 and is less popular than the alligator alley further to the north. I did take the wise decision not to stop and take too many photos, I thought that just because this wasn’t called alligator something that it would be too wise to stop at the edge of the road and take photos… 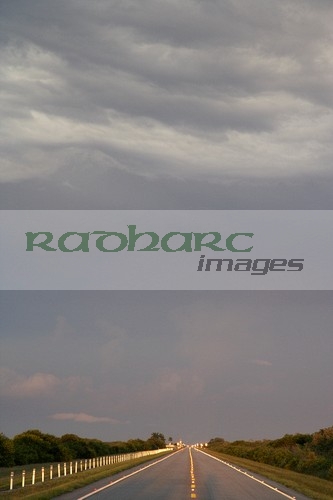 Thunderstorm highway sunset florida
When planning out this trip I knew this night was going to be a problem in planning. I couldn’t find any hotels close to Everglades City online, well ones with availability and this was close to the airboat ride place that was recommended on tripadvisor. I also hadn’t booked the charter boat so there was a chance I could be passing earlier in the afternoon so could do the airboat ride before going on to Naples about sunset…
…all this waffle and nonsense is just to tell you that I was driving for another hour and half past the airboat place to get to tonights hotel. Which of course means to get to tomorrow nights hotel Im going to have to be at the airboat ride place for opening time at 9am, which means checking out about 7am…. …ah balls! The next person who asks me where Im going next ‘on holiday’ is going to get a smack in the face!