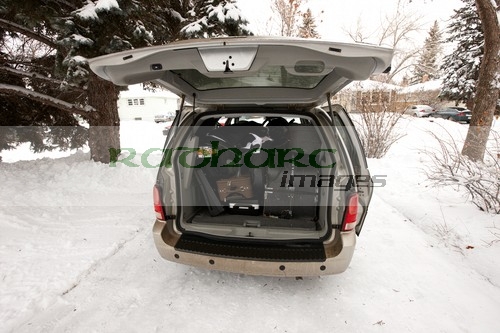 Putting the Band back together – part 1


On this trip the gigs vary from one man acoustic sets to small groups all the way up to the full band performance. The venues are a mix of old and current churches, a high school auditorium, an old cinema, a theatre and even a restaurant with a stage in a town with a population of 28! I didn’t quite get how we were going to be playing two nights sold out in a town with a population of 28 but later I would learn how and come to love this country for it. 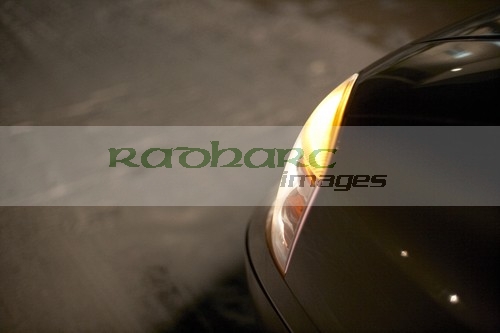 You forget the vastness of this country and how everyone here takes it all for granted and adapts. We drive for 3 hours for a one man show in a church. Coming from this neck of the woods this seems absolute madness, particularly driving at 100 kph in mid winter in temperatures of -20C and below, through the darkness on unsalted roads and and… The round trip that night for just over an hours concert would be impossible in a straight line on this island, you would just run out of land.
When we arrive at the church its the dead of night, its not even really a town its a church and a few houses on what looks like a main street off the highway. It hurts to breath as we unpack the equipment from the back of the Minivan and run up to the church doors. There’s a blast of heat as the doors open and a small army of people appear to help us move the gear. We are welcomed in like long lost relatives to a large hall attached to the church where more people than it looks possible to fit in are sitting down to a large communal dinner. Apart from looking like the tardis from the outside, I cant understand why there aren’t a few tourists busses outside. Surely there must be another part of the town to the bit we came in on because there are just too many people here. 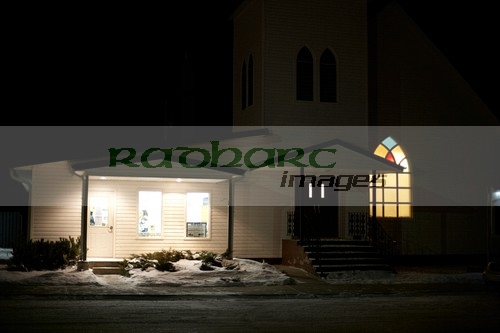 church with porch light on during cold winter night

Over a cup of coffee I’m helped by a couple of the locals setting up the merchandise desk. I meet an elderly woman who was born just outside Belfast and she came over straight away when she heard the accent. Pick a spot in the middle of nowhere Saskatchewan and here’s another Belfast native made good.
I then realise that our drive of 3 hours is from the nearest big centre of population to this town. People go to Saskatoon to shop from here. That’s a hell of a distance, but if you realise that that also means that your catchment area for entertainment is everyone in at least an hour and a half drive radius. It also explains the use of churches, cinemas, theatres and high school auditoriums as music and pretty much everything else venues, they are the places with the largest capacities available. That’s why these things are packed out, you get everyone coming and you also get a more knowledgeable crowd of people attending because if they only have one gig a month they all get to pick who they would like to hear. Some of the crowd were more knowledgeable about the material than I was!
It also gives you a more homely, warm feel to concerts and gigs. Even with a few hundred people the gigs are more intimate. People like a Q+A, they don’t just want to be entertained they want to participate. Its also strange to see the ethnic mixes and history of the people here. Apart from the native inhabitants of the plains most of the farming areas we visited were only populated by European and more recently Asian settlers in the last 100 years. Some of the more elderly members of the audience were part of initial settling families from Europe with Ukrainians being a large proportion of the mix. Grain farmers from the Steppes moved here in large numbers to do the same thing in similar conditions half a world away. Puts into perspective my little ear freezing moment where I just had to go a couple of hundred metres to the nearest supermarket, dressing in modern technologically advanced layered clothing as opposed to the poor hardy souls who originally lived in this country and the later settlers.
An almost comic interpretation of the difference is in the elder members of the Ukrainian contingent who take their seats, sit with their arms folded and watch with the words ‘entertain me’ almost etched into their brows. The response can be very muted but with animated discussions after the event over post gig coffee and biscuits. A sturdy handshake with a wry smile and a thank you for entertaining us.
Every day is a schoolday and packing my gear back into the car I realise that this is why I do what I do. Its about people, its about traveling half way round the world to meet people from round the corner. Its about going to a place where people shouldn’t really be and see how people hammer out an existence and then sit down for a meal with their friends and families. Its about people talking, learning from each other and just being happy to be.
At times I feel like a bit of an interloper, the camera divorces me from the action and the audience to a certain extent but as the tour goes on I evolve from being a recorder of the events to playing an active part. This wouldn’t be appropriate at home, it would be regarded as unprofessional and its something that makes me uneasy but here its being part of the show. It seems it would be rude to come all this way and not interact, not answer peoples questions, not be part of the story as well as someone who documents it.
I feel at home here. Better than that, I’m encouraged to feel at home here. 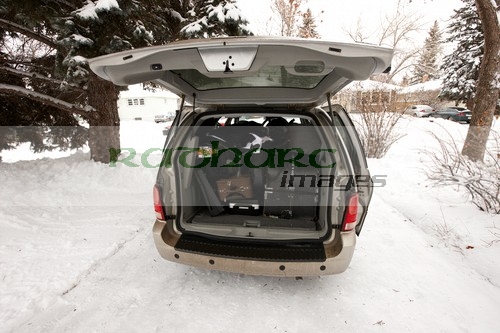 packing band equipment into the back of a minivan

The distances involved are something that its hard to get used to but people here take for granted. Our next gig was a 7 hour drive each way with a 10 piece band. I went along to rehearsals a couple of nights before the gig. I brought the cameras to document the rehearsal process and a couple of the guys laughed with that ‘he’ll learn’ look. Rehearsals took place in the basement of one of the guys houses. Nothing unusual there as on my previous visit Id seen basements bigger than my entire house, housing everything from games rooms, couple of guest bedrooms with ensuites to complete sound labs and now rehearsal spaces. In the corner of the large expanse was an already set up drum kit but there were only 3 music stands left out. Its gonna be a tight squeeze I though and pushed all my gear into one of the corners.
Then of course after the ‘Is everyone ready?’ question I realised that the webcams and computer monitors around the room were showing the different band members scattered to the four winds on the 7 hour drive to the gig. The actual sound check will be the first time the band has been together in weeks. Seems simple now to arrange rehearsals and the compositional discussions over Skype. You just ignore the cold and the wind outside, sit in the house, dial up your buddies and play away. Id better not live there as Id never leave the house for 6 months. Of course the local supermarkets don’t do deliveries like they do here so I would have to venture out at some point. 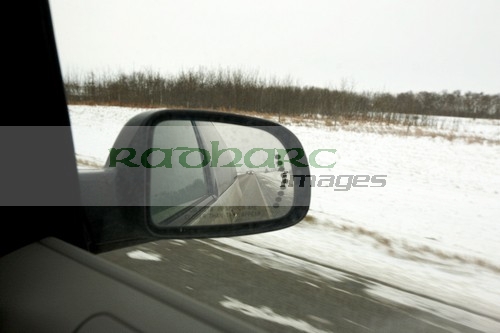 At some point during the 7 hour drive I realised that I was in trouble a bit. My nose was bleeding and my eyes were very itchy. During the sound check I had difficulty seeing through the viewfinder. Not the best of situations for a photographer. The cold dry climate had started to take a toll on my body. My skin was drying out and now my nose and throat was doing the same. Apparently nosebleeds are common with people adapting to the climate and I was assured that it would wear off after a couple of years! A quick dash to the local pharmacy (and thank God we were in a town big enough to sustain one) for eyedrops and nasal spray and other stuff I didn’t think you could buy. I didn’t know it at the time but the eye problem would become a permanent fixture from then on and curtail my travels towards the end of 2013/early 2014.
Not in the same league as smashing a leg in Kenya or kidney stones in Buenos Aires but again a timely reminder that it is a hostile remote environment and these small communities can be very much on their own in case of emergencies. I had a mate who went to work with the British Antarctic Expedition for 18 months and one day the radio hut burned down. In the dry climate it just went up and continued to burn. I asked did they not try to put it out and he said they could do nothing in that environment so just broke out the marshmellows. I think he was joking… 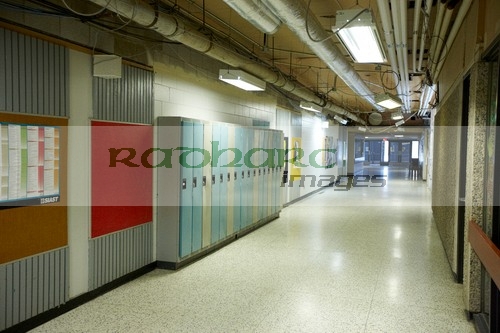 With a population of 10,000 odd this was a much larger venue in the high school assembly hall. The demographics were interesting as well, the town is the main grain trans-shipment point in Canada and also has a large oil and gas exploration community so you have people drawn from all over Canada and indeed the world. You know you are on a bigger scale when the local TV station sends a crew and you have a couple of local press photographers for company. Within a few songs the differences in the audience become apparent with a fair few people dancing in the aisles and at the back of the hall. Less food and more swing! 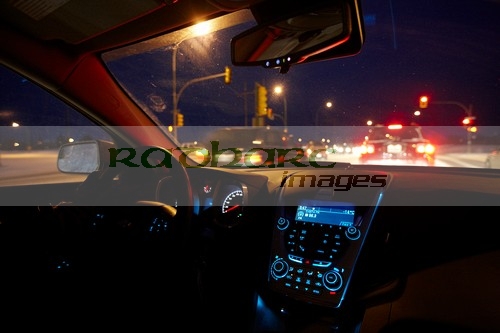 driving at night in Canadian winter

On the 7 hour journey back home the temperature gauge hit -25C. Do you want us to stop and you can get out and walk around and set a new record?
Errr no thanks! Or maybe I just used 2 words, the second being off!