Its the end of the world as we know it… 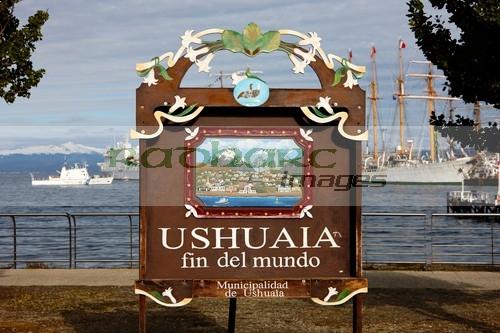 And I feel fine.
Well Ive finally arrived at Fin Del Mundo, the end of the world, except its not really the end of the world, theres another town a wee bit more south of here in Chile but its too small to count apparently.
My arrival in Ushuaia was a bit subdued but stunning due to the just post sunset colours of the snow covered mountains and the relatively clear skies. Unknown to me the only clear skies I would have in Ushuaia as I sit now listening to the Man Utd Liverpool game on the internet and type this blog.
Looking back Im glad I decided not to just chill out and stay in the B+B and get out and wander round the town in the evening twilight, as it really was stunning and the clean fresh air with little wind brought to mind an Alpine village, next to the sea, at the end of the world.
You would think I would have known better with my ‘sure its only 6 blocks up to the B+B, no point getting a taxi’ thoughts as I left the bus station. Besides which again I didnt have any local currency (doesnt really seem to matter here) and there were no taxis at the rank as a couple of busses had got in at the same time.
The six blocks was of course six blocks across and six blocks in or should I say, up. Halfway through hauling the luggage up the very steep hillside I begged a taxi to come past and take all my money!
The B+B is another one of those described as quirky on tripadvisor, but the selling point was the description of the breakfasts and the idea that tea, coffee and cake is available all day. It isnt until now that you realise how crucial a decision that was. 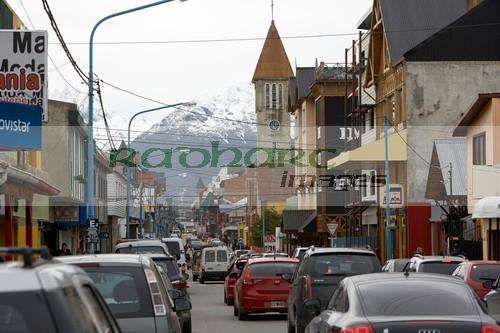 I wandered up and down the town in less than an hour and went in and out of a few gift shops. Stomach was still up in the air from the 11 hour bus journey so just headed back to the B+B for tea and a cake.
On check-in I was given the house rules which included using a coaster every time I made a cuppa, the manager kept coming out every 10 mins or so to arrange the coasters, check the direction the flasks were pointing and to make sure there were exactly 8 pieces of cake left out at every instant in time. Dont know about quirky, reminds me more of fawlty towers. Still they are very helpful and mean well.
Up early the next morning for sunrise or what would have been sun rise if it wasnt snowing. The day was going to be a washout both photographically speaking and physically. This close to the Antarctic trip I didn’t fancy getting soaked and coughing/sneezing/moaning my way through the expedition. I just hoped my fellow travellers think the same way 😉
I sat around for a few hours catching up with emails and sorting out a few stock sales before venturing into town about lunchtime. Well I say lunchtime, I have absolutely no idea what time people here eat at. All I could find open was the chocolate shop so hot chocolate and a fig, port and chocolate cake was lunch. All very tasty but not really the type of stuff you want to be eating for lunch during travelling. But hey, who am I to argue. 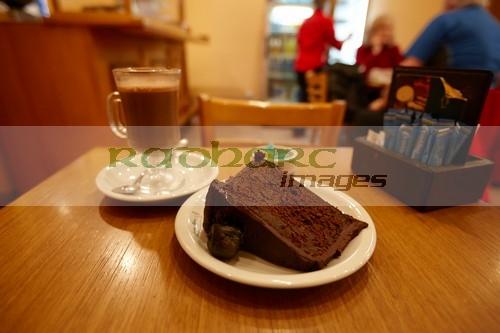 It clears a little in the afternoon so I wander around getting some shots so at least I have some in the bag.
I go to check out some of the gift shops but of course its now siesta time 1-3 and everything is shut. Lots of confused looking tourists wandering about the place trying doors and talking in small groups.
I exchange some cash in a local hotel. They are doing a rate of 10 pesos to the dollar and considering the official rate is abouty 8 pesos to the pound, thats a bloody good deal. Its the state of the Argentine economy in the last couple of months, it had pegged the peso to the dollar but as had to devalue and its fallen about 20-30% in the last month alone. Everyone wants paid in hard currency so are prepared to make a deal. It is of course a cruise ship stop off so everything is probably 20-30% more expensive than normal anyway so it evens out…
…or it would if you could actually find somewhere fucking open!
I do find a very good camera store but with the huge import duties on overseas goods I could sell all my equipment 2nd hand here and rebuy it new at home and still make a fairly sizeable profit. Prices here for foreign camera equipment are about 2-3 times the price in say new york. I dont need a replacement lens that badly!
I wander around aimlessly for a few hours until about dinner time 5-6pm in the forlorn hope of being able to buy some food, any food, but to no avail. The only place open is the irish bar and it is bunged to the rafters with a queue out the door, as is the chocolate shop…
I find a supermarket and get some bread and a couple of manky bananas to replace the manky bananas I bought in Punta Arenas.
I go back to the B+B for tea and cake and settle in for the night to watch some english language channels on the first tv since I left home.
The next day was slightly better and the sun managed to shine a bit so I went out and wandered round the same streets taking the same photos but without the rain as I had the day before.
There were no cruise ships in town so there wasnt a queue for the irish bar and I did hold out some small hope that they might actually have a tv and might actually being showing what turned out to be Irelands winning of the 6 nations. But no.
I did cave in and order guinness along with my steak sandwich and 20 mins later the waitress came over to tell me there was no guinness and would I take the quilmes stout instead. Sure why not, but why wait until now to tell me. 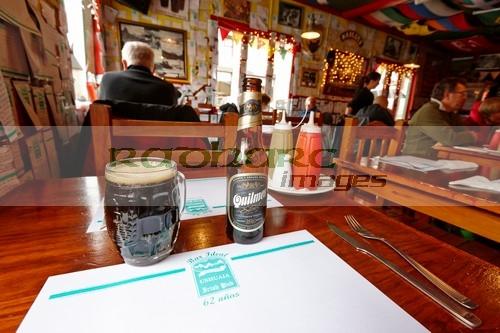 I know we Irish enjoy our dining out experiences and North American visitors can get pissed off with our non-instant restaurant service but we seem like fast food compared to here. I cant think of a single meal where I haven’t had to pack up and pretend to leave before I get the bill. A guinness and a steak sandwich taking 45 minutes is definitely taking the piss, particularly when it takes you to 1:05 and siesta time when everywhere else is closed.
The bill comes and there’s a cover charge and a request for a tip. Seriously a cover charge for one person in a fucking almost empty pub? That’ll be your tip then. Oh and here’s another tip, don’t serve a burger smaller than a big mac and call it a steak sandwich, serve it fucking quicker and… and…
You can see Ushuaia is starting to wear on me. Its the cruise ship port syndrome, they don’t give a shit as most people are only here for an hour or three and never to come back again.
I wander round out to the aerodrome across the bay where a pilot tries to divest me of a few hundred dollars to take me on a scenic flight for an hour. Now if he could tell me where I could watch the man u liverpool game, get a meal and a drink that I actually ordered, within the 90 mins timeframe Id just give him a few hundred dollars! Its something to think about for the day I have to spend in Ushuaia on the way back. 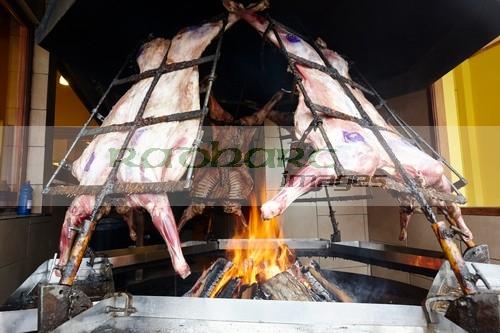 I wandered around for another couple of hours, hoping for the ‘best’ restaurants to actually open. I was feeling a bit sick by this stage with sugar overload and was crying out to sit down with some vegetables or anything which wasn’t a pastry covered in sugar. I didn’t really want to go to one of the all you can eat parilla restaurants (bbq) because when travelling you have to be careful with the time take to fully digest meat meals. You cant be bloated for a day or two and keep walking/taking photos although Id probably take it at this point.
I wander round meeting some more confused hungry tourists but cant face the chocolate shop or the irish pub again so get some souvenirs and head back to the hotel for coffee and cake.
Really feeling quite ill at this point so just get to bed early hoping its just a passing thing.
I get up and go down for a nice plate of eggs this morning and lay off the pastries and dulce de leche. In my whole month in Buenos Aires before I hadnt tasted dulce de leche and didnt know what my friends back home were raving about. Now I do but this morning was a time to lay off the sugar rush.
Id not been able to find anywhere to watch the game so just sat about the B+B all morning talking to some of the other guests, confusing talking in bits of 4 different languages before you guessed it having some tea and some cake. 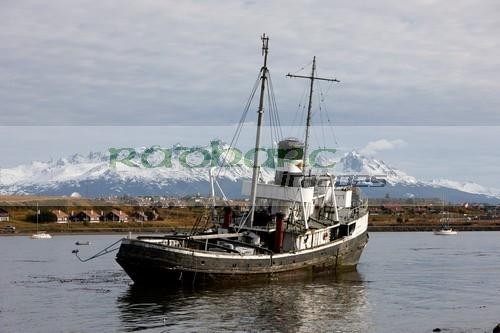 Being here in Ushuaia has saved me a fortune, Ive hardly spent a penny and bloody nowhere has been open. Nothing opens to 10, shuts at 1, might open 3-7 and then maybe again in the evening but Ive never been around that late to find out.
So Liverpool have well and truly gubbed Man Utd, my luggage has been already picked up by the ships crew and Im 2 hours away from heading down to meet up with the ship and starting boarding…
…which means just enough time for tea and a cake… 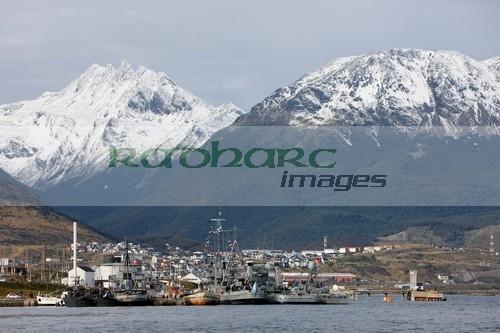 …next stop, Antarctica…
…happy St Patricks Day…
…to be continued…