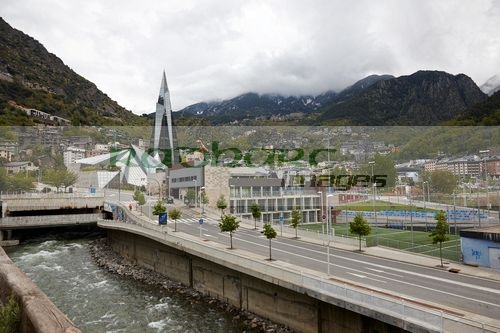 The hills are alive… with rain and more rain.

Somehow I managed to scrape myself up out of bed, get a shower, get a coffee, wander to the metro and get down into the centre of Barcelona without opening my eyes or muttering a single comprehensible word to anyone. I even managed to get some photos of the just opened and empty metro and again if anyone had stolen my camera at that point, they were welcome to it. 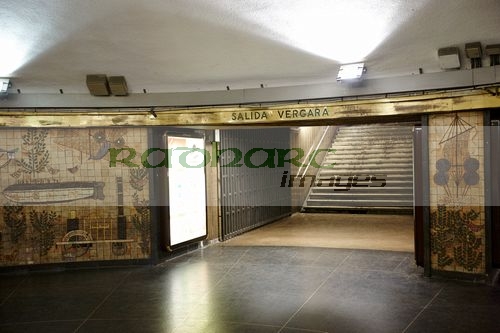 10 minutes after I took that photo I found myself standing on a wet Barcelona street, looking at google maps on my phone, staring at a printed out sheet of paper and back again. That sinking feeling when you realise that last week you booked this trip on a site you had never visited before, they were the only ones advertising this type of trip (day trip to Andorra via France) and that it was 5 minutes to the meet time and you were standing here, just, well getting wet.
A few minutes later some Japanese tourists looking very relieved walked around the corner. They were relieved in that false sense of security way, knowing that if at this very instant in time expensive foreign trips, sofas, new plasma tvs and the odd xbox or playstation were being ordered using their credit card details, that they wouldn’t be on their own.
Some more damp tourists arrived and all our moods lightened. An official looking woman arrived and opened the door to an office and ushered us in. We all went to the coffee machine and then she beckoned us all over to the desk with the word ‘Valencia aqui’. I was the only one left standing at the coffee machine. Balls!
When it became apparent that I wasn’t interested in going to Valencia a torrent of Spanish came my way to which I was going to fall back on my traditional response of Si and if that didn’t work then No. I thought Id better expand my linguistic response by saying the word ‘Andorra’ and making it sound like a question but that got a quizzical look followed by a shooing motion telling me to get out. The continued shooing motion followed by the English phrase of ‘No Andorra here’ made me think Id have been better off staying in bed and throwing 20 euro notes down the toilet.
I walked back outside into the rain and tried to stand there and not look as stupid as I felt. A quick net search revealed no coffee shop open for another hour and I was now desperate to get somewhere warm and dry. Just then a small minibus came sliding down the cobblestoned street, the door flew open and the driver shouted ‘Fox? Andorra? get in we are late’
No shit sherlock but I’ll forgive you.
Turns out the rest of the tour were pretty much one party and they had gone to pick them up from their hotel. As usual with larger parties they think they are the only ones going so were over a half hour late.
Still Im now on a warm dry bus heading north to France.
An hour later we arrive in the small medieval town of Baga, a great example of medieval town planning with its original 13th century square, series of town steps and 14-15th century parish church. Or so Im told, at the minute its pissing down with rain so I’m holed up in the old place with a coffee machine and a toilet, the local bar. 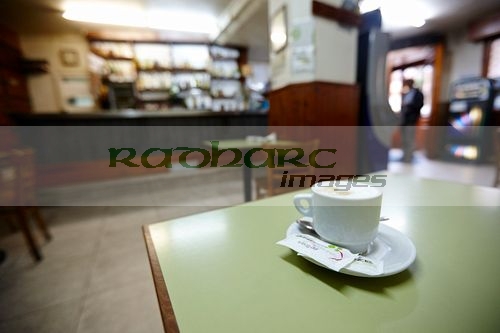 We get a quick orientation lesson and are given our depart time 20 minutes from now. Nobody moves. Its nice here sitting holding this warm cup of coffee and not getting rained on, besides which the parish church is closed and our guide has disappeared to see if they can get the keys to open up so we can have a look. Judging by the looks on everyones faces, I’m not the only one who thinks she can take all the time in the world.
She returns with that enthusiasm that only tour guides seem to be able to muster this early on a cold wet damp morning. (we are now high in the mountains)
Here’s some photos of Baga in the rain. 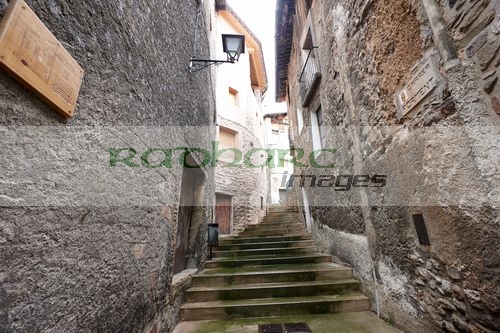 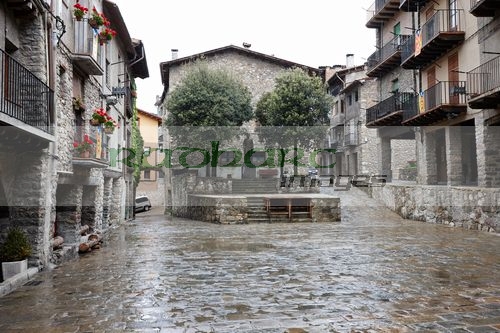 An hour later we pull through the ancient city bastion of Mont-Louis in the French Pyrenees. Although its even colder here its not quite as rainy and we have been promised breakfast so its not all bad. Mont-Louis is sort of cool as its part of the Fortifications of Vaubon group of sites that dot the borders of France, all designed in the 17th century. The town entrance gate is only wide enough for one vehicle and the inner part of the bastion is home to a French Commando training centre. We were warned not to go up there and take photos. Normally that doesn’t put me off but I did have a mate who was in the French Foreign Legion and I didn’t fancy getting the shit kicked out of me trying to say I wasn’t English.
Besides which coffee and a pain au chocolat was calling me 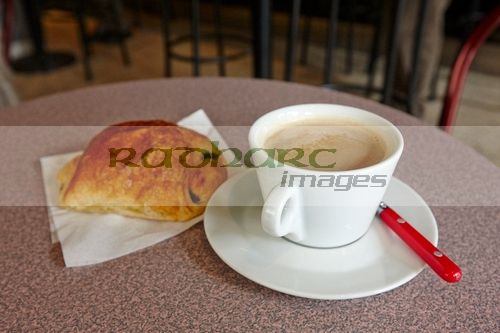 I surprised myself with my level of French and not so many blank stares in return, I even ended up translating some of the requests from the American group on the tour to the various shop owners. To be fair to them and to the locals there were only the variations of black and white coffee, with or without sugar. For me that’s generally enough choice and I never did learn the French for soya milk and artificial sweeter. The French, God bless them, probably don’t words like that in their language.
Mont-Louis has the worlds first solar furnace but it wasn’t open. It is also famous for a yellow train through the mountains. That was closed too.
I busied myself stocking up on some local French pastries that I would later photograph in the hostel and give out to anyone who looked like they needed them. Again I surprised myself with a full 5 minute conversation with the girl behind the counter. I guess she either got sign language, grunting and pointing or I haven’t really lost my French after all. 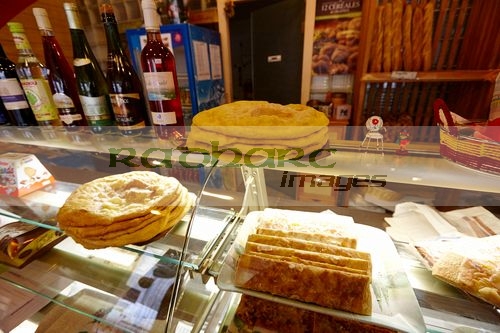 We soon packed up and went back out of the citadel and headed off to Andorra. 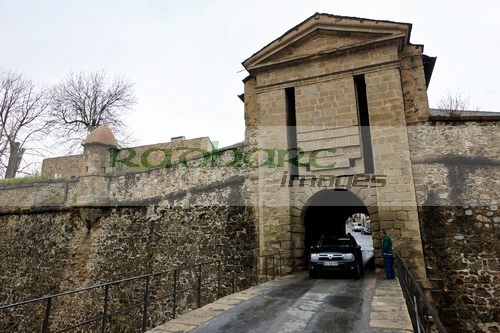 car driving through internal gateway to mont-louis fortress of vauban

Andorra is one of those tax haven countries who wouldn’t really exist if it wasn’t for the whole tax haven thing. As a result not a lot happens, the only tourists are those from Spain and France who come here for cheap drink and other duty free stuff. My priority wasn’t duty free but the the acquisition of some boxer shorts seeing as I had forgotten to pack any underwear whatsover. This is the 2nd full day and although some would argue I hadn’t fully explored the inside out and back to front nature of my current boxers, I still had a week to go.
I quickly found out that Andorra is like other small places, the Isle of Man being one where nothing much happens and life is at a more sedate pace. They have an afternoon siesta from 1:30 to 3pm and seeing as we would be leaving at 3 and it was now just after 12 that’s a lot to fit in in an hour. I hit the shops in search of boxers and to be honest it was like searching for gold, well actually it wasn’t, you could buy gold in most shops, along with drink, tobacco, electronic goods, perfume etc etc. I managed to get sorted in one of the shopping malls and sat down to get my bearings and see where I was going. A couple of minutes later I was approached by a security guard and I thought it was because of the camera. It wasn’t.
I had brought my hydration backpack with me. You know the ones with the water bladder inside and the pipe running down the straps so that you can take a drink without taking your bag off, opening it and leaving yourself open to robbery, stabbing and the like? Those ones? The ones where you forget to lock off the tube, accidentally sit on the tube end in such a way that the water comes out looking for the rest of the world as if you are sitting down pissing on the floor? Those type?
It took a while to explain to the security guard that that indeed is what was happening although the wet patch on my trousers wasn’t helping much.
It was now time for Andorra to shut down for a couple of hours and for all tourists who knew this in advance to leave, or in other words for all of us on the one tour minibus to wander round the town aimlessly for 2 hours to try and find the one open restaurant/coffee shop.
How this place hasn’t had bad reviews on tripadvisor is a mystery to me, well actually it isn’t that much of a mystery, it’s the only bloody place open! You can have anything you want as long as its chicken swimming in oil and barely cooked fries. ‘Catalan style’ apparently. I don’t think these photos will make Conde Nast! It might make a medical journal if the pink colour of the chicken is anything to go by though. I eat it anyway almost convincing myself that its just the way its done here… 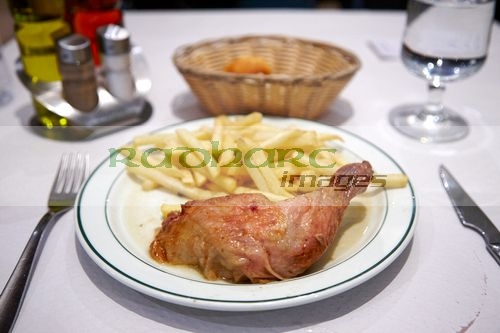 Im sure Andorra is a beautiful wee place when the sun is shining, its warm or when its covered in snow and cold but today its neither and wandering round with everything shut reminds me of how bad tourists get walking around Belfast on a Sunday. 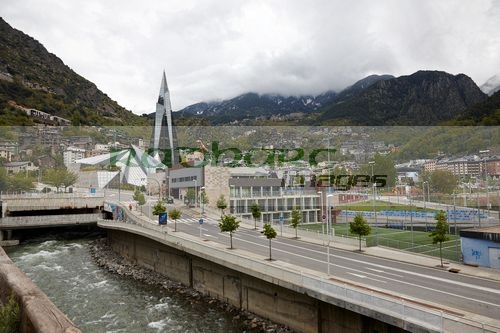 So another country chalked off the list and a definite feeling of been there, done that got the t-shirt. Or in my case the bottle of absinthe!
I ended up back at the hostel for ‘cocktail night’ which was Mojitos. They were using fresh herbs ground up and picked from the garden so having gave out the now crushed and slightly soggy pastries Id bought earlier in the day I set up down in the common room close to the cocktail guy. I spent about a half hour there watching people come up and ask how much the cocktails were only to walk off (2 euro) so I asked him how much for the bottle. He couldn’t understand what I was saying so I explained that I wanted to buy the whole bottle of drink, herbs, lemonade and everything else so he could give the drinks away free to anyone who asked. That sort of made me quite popular that night, well that was until I started to give out shots of the absinthe. A lot of sick looking people the next morning. Good job Id only one more full day in Barcelona and then it was the train south to the Costas!