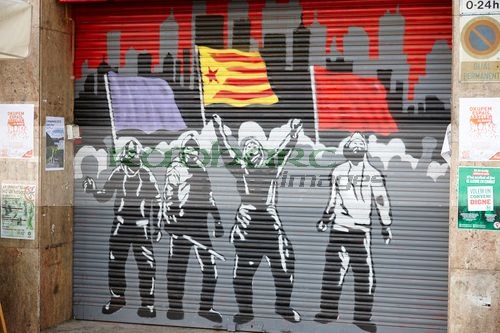 Friends until the end – Viva – Barcelona!

It was a difficult night in the hostel. Not for the amount of cocktails consumed, not for the amount of rain falling but more for the fact that somehow the corridor door between my single room and the shared bathroom had got locked during the night.
This leaves you with a few options, bang on the door for hours waiting for people to come and open it somehow, go out into the garden and take a pee in full view of the CCTV cameras and probably getting security called, or go back into your room and pray that you have an empty plastic bottle somehow. This is the one instance you don’t think of when you walk around with a water bladder backpack (water bladder being an excruciating term to use in this sort of situation) trying to save the world from too many discarded plastic bottles. Right now one of those plastic bottles was exactly what the doctor required. Luckily enough I had one half full bottle by the side of the bed for drinking during the night. I agonised whilst I poured that water out into my water bladder feeling the pain of every single drop before proceeding to slowly panic as I gradually filled the bottle almost to the brim again. Next time I’ll buy 2 litre bottles.
With a mental note to self not to drink the apple juice in the morning I went back to sleep for a lie in.
Well I would have had a lie in if it wasn’t for the German school group sitting outside my room at 6am chatting away over breakfast. After working out the logistics of hiding my bottle of funnily coloured apple juice on the way to the bathroom I realised that Id left my shower gel in the shower the day before but this being a hostel it was lost and gone forever at this stage.
Pouring my own pee down the toilet and getting showered with the hand soap from the toilet hand basin dispenser made me think what a great decision booking a 5 star hotel for the rest of my trip really was. You probably didn’t want to hear all that but I thought Id throw in a few realities of being a travel photographer. Its not all glamourous women, fantastic food, northern lights and whales in Antarctica. 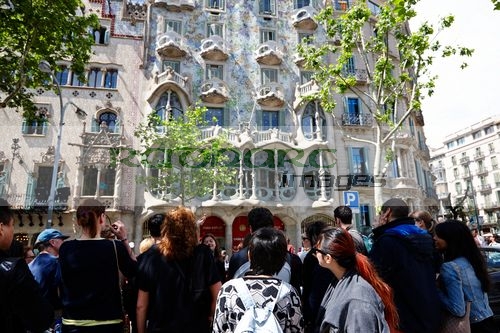 I had neglected a lot of the more usual tourist sites in Barcelona because that didn’t really cover the shot list I had prepared before I left on the trip. That’s the difference with a lot of photography, photos of the Sagrada Familia or the market or the modernista buildings may well be what everyone things of as the photos of Barcelona and in a lot of ways they are but they aren’t necessarily what sells. Or more likely the breadth and range of photos that are likely to pay for a trip like this as well as produce a wage for the days you are away. You would generally be surprised at some of the lists of things clients, agents and sub agents send me when I send them on my plans. For most trips my advance itinerary changes, sometimes dramatically, due to changes or specifications from 3rd parties. 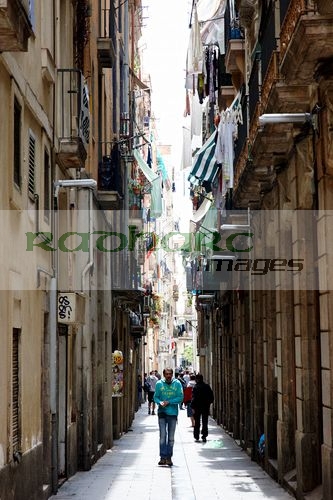 I had already covered most of my shot list so today was to get acquainted with some of the more familiar landmarks and sites as well.
This is the wander round Barcelona that most tourists will recognise, the walk up past the Casa Batllo, then over by the university and then El Raval and the old town. It was a beautiful day and there were loads of tourists about and all the main sites were full of local police, both uniformed and a few obvious undercover guys. Obvious undercover is a contradiction in terms but having been brought up in Northern Ireland you tend to be able to spot someone who is out of place, that also helps to spot pickpockets and their associates. If you are outside the Casa Batllo, most tourists are looking up at the architecture, those faces in the crowd looking out or scanning tourists backpacks generally aren’t there for the scenery.
I wasn’t really here to do the whole tourist thing so just breezed past most of the sites, not able to spend the time to go in and have a look around for myself. Of course St Josep La Bouqueria market was the exception. Id waited until it opened and hoped for an early lunch from one of its stalls, it turned out many stalls! 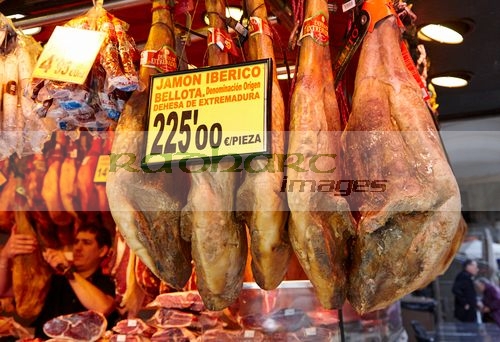 I’m not sure of the crime stats for here but it really did look like pickpocket central, loads of people, crowded together, bumping against each other naturally, so just a few loose euro in my pocket and everything else tied down, locked up and the camera anchored to my wrist with a specialist wrist strap Id bought just for this trip. Losing my hand for the camera though wasn’t a choice I was planning to make. 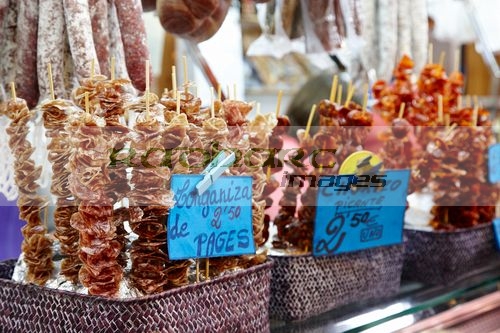 The market is full of stalls of fresh food and drink, the smells alone were starting to make my stomach rumble. I started off with some pastry then went on to the stall with the fresh fruit juices before ending up with some spicy cooked sausage. There were loads more things my eyes wanted to sample but I didn’t have any more room so I bought a few things for dinner later on in the hostel and went for a wander down through the old town in the direction of the zoo.
One of the agents I worked with in Barcelona was out that direction and I had read different reports on their financial status and wanted to walk past their offices and see for myself. A lot of the businesses here were closed due to the recession and in most of the cases their metal shutters had been spray painted or various slogans and posters about the recession had been stuck up on them. Walking past the agents office, the lights were on on the 2nd floor but the downstairs part of the office was shut with the metal shutters spray painted. Time to get those outstanding invoices in! They have since moved to small serviced offices in the city and are still in operation today. Im still fairly prompt with invoicing them though! 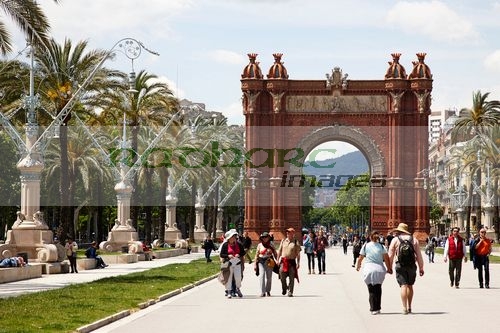 I wandered out by the Triumphal arch and down towards the zoo and the parliament buildings. A truely beautiful city and the wide open areas were full of people just wandering around enjoying the open spaces and warm sunshine. I sat down outside the parliament buildings and nursed my blisters and just chilled out. I get the city now, away from the hussle and bustle, the pickpockets, the tourist traps this was a great city to walk around in and just chill out. 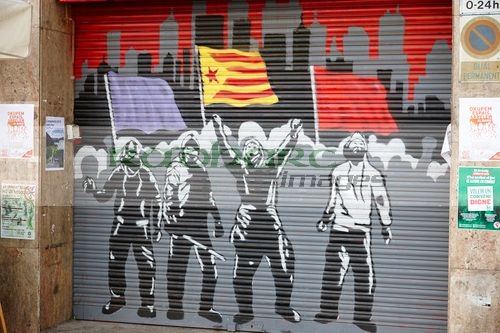 I just wandered through one of the local neighbourhoods and bought some water and some street food before heading up in the direction of the Sagrada Familia. I was just about done when I got to the site and the queues of people going round the corner, standing in that heat didn’t encourage me to join them. My blisters needed some serious attention so I said goodbye to central Barcelona and got on the metro back to the hostel. Probably a sign of getting old but sitting up on the roof terrace with a beer watching the sun go down over the mountains was probably more in keeping with the early start and dragging luggage across town to the train station in the morning. As the sun finally set over the hills, not for the first time in the last couple of days, Freddie Mercury was belting out ‘Barcelona!’ in the back of my head.
The hostel was quieter now, Tuesday night in off peak season with some South Americans and the ubiquitous few aussies and kiwis cooking their dinner in the kitchen. All of the residents tonight were travellers and with the exception of myself all were a very long way from home. All looked a very long way from home with that tired, tanned, slightly skinnier than they set off, traveller look about them. These were the people with stories, those who have backpacked a long way from home to cook their rice and beans and share it and a couple of shots of absinthe with a slightly overweight Irish guy, old enough to be some of their fathers but who was interested in their stories and who had a few of their own.

Goodnight Barcelona. (and I wonder if you are singing Barcelona as well now)